Coeus or Koios was one of the Titan gods, son of Uranus (Sky or heaven) and Gaea (earth). He and his brothers conspired against their father, laying an ambush for him as he descended to lie with Earth. Four of the siblings were posted at the corners of the world where they seized hold of him and held him fast, while Cronus castrated him with a sickle. 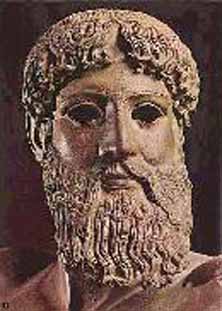 Coeus was god of intelligence who presided over the axis of heaven around which the constellations revolved. With his sister and consort (wife) Phoebe, he fathered Leto and Asteria.
Posted by Rohit at 07:23

Email ThisBlogThis!Share to TwitterShare to FacebookShare to Pinterest
Labels: Titans....