In Greek  mythology, Pheme was the goddess or personification and spirit of rumor, report and gossip. Pheme was said to gain pleasure in the affair of mortals and gods, then repeat what she learned, starts with just a whisper but repeating it louder each time, until everyone knew. 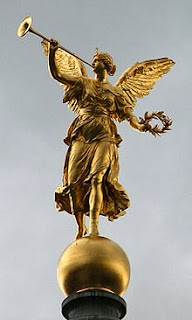 Pheme was depicted as winged goddess with dual nature, fame and good repute in positive sense and infamy and scandal in negative sense. Pheme was the daughter of Gaea (earth) or Elpis (hope). Pheme was also described as Zeus messenger, because often it was impossible to trace the source of a report or rumor, which was said to come from Zeus.