Leucothoe or Leukothoe was princess of Persia (Achaemenids), and daughter of Orchamus and Eurynome, the king and queen of Persia. Helios, the sun god, was attracted towards Leucothoe's beauty. Helios, who was able to see all deeds from both morals and immorals, only gazed Leucothoe. One night, Helios gained entrance to Leucothoe's chamber, where Leucothoe was with her twelve maids. Helios transformed himself into Leucothoe's mother, Eurynome, and appeared before them. 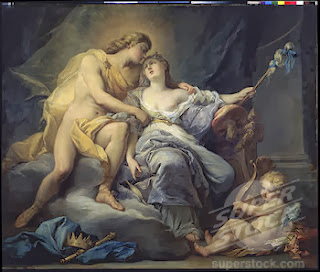 In form of Leucothoe's mother, Helios asks maids to leave the chamber as she waited to speak with her daughter in privacy. When room was was left without a witness. Helios took her in his arms and kissed her. Fear gripped Leucothoe heart, she known something is wrong. Helios resume his own true shape and seduce her.
Clytie, an oceanid nymph loved by Helios, abandoned her for Leucothoe, was jealous and in anger spread the tale of Leucothoe shame. Clytie make sure that Leucothoe's father, Orchamus, knew the tale of Leucothoe shame. Orchamus came to know about it, even Leucothoe told that Helios ravished her againist her will, in anger he ordered to buried her alive deep in the earth. Helios tried to save her, but he was late, she was crushed by the weight of earth. Helios changed Leucothoe lifeless body into a incense plant (shrub of frankinese). According to some versions, Thersanon was son of Helios by Leucothoe. Apollo was also associated with sun, and was even identified with Helios, the sun god.So in some versions Apollo is described who seduce Leucothoe.