In Greek mythology, Lotis was a Naiad nymph of springs of the river Sperkheios. During the feast of Dionysus, celebrated by custom each third winter, was attended by Lotis. Priapus saw Lotis and got attracted towards her beauty. Priapus was looking for the chance to get alone with Lotis.

Dionysus supplied wine and wine does it's magic, at night, bodies lay everywhere, conquered by sleep. Lotis was sleeping further away, tired from partying. Priapus seized this opportunity and silently came near Lotis. He draw the cover from her feet and start the happy road to his desires.
But Lotis was awakened by a sudden cry of a donkey and she ran off. For spoiling his opportunity, Priapus kill the donkey. 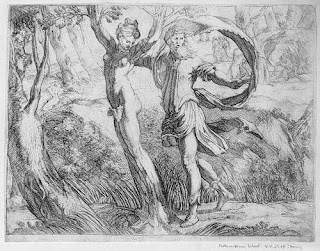 Priapus pursued Lotis until the gods took pity on her and turn her into Lotus tree. Later Dryope picked a flower off the tree, Lotis had became, and was transformed into a black poplar.