In Greek mythology, Autonoe was described as the daughter of Cadmus, founder of Thebes, and Harmonia. Autonoe was the wife of Aristaeus and mother of Actaeon and in some version also of Macris. 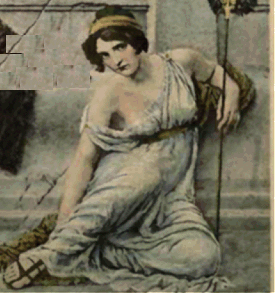 Autonoe and her sisters were driven into a bacchic frenzy by the god Dionysus (her nephew) when Pentheus, the king of Thebes, refused to allow his worship in the city. When Pentheus came to spy on their revels, Agave, the mother of Pentheus and Autonoe's sister, spotted him in a tree. They tore him to pieces.
Actaeon, the son of Autonoe, was eaten by his own hounds as punishment for glimpsing goddess Artemis naked. Autonoe, being distressed, left Thebes to go to Ereneia, a village of the Megarians, where she died.